Lily died on Saturday (today is Wednesday, five days later). My apartment feels empty and silent, even with the TV on, and I feel sad because she’s not wandering around talking and purring, weaving around between my legs, and bringing me paper wads to throw for her. And besides all that, now there’s no one to rule my roost. Below right is a closeup of Lily, taken when she was about two years old. She has small black spots on her nose, which the vet said were called freckles, and as she got older they became more pronounced, plus they increased in number. Below left is Lily as a kitten, right after I got her. 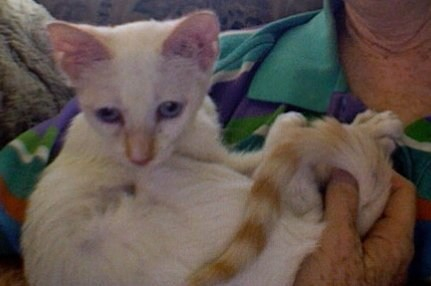 I know Jesus is the Lord of my life. I know He’s as close to me as my next breath, but He gave Lily to me as a gift, and now that she’s gone I miss her terribly. There’s a void in my apartment and my life, and I don’t know how to fill it ~ or even if I should.

If I allow myself to pause long enough to feel the void of Lily’s absence, and the resulting silence in my life, the pain becomes acute. I felt so much pain yesterday and today that I didn’t think I could stand it. I even considered running away. As usual, however, when I think of running, I remember that trying to escape is a useless endeavor, because the pain will go with me wherever I go.

Lily was twelve years old when she died. I got her in September of 2008 when she was about four months old. She was such a wonderful little fur-person! One of the most amazing things about her was that she fetched, something she was doing when I got her.

Sometimes she would drop the paper wad too far away for me to reach it, so I’d tell her, “Lily, it’s too far away. I can’t reach it. You have to bring it closer.” And if I said all three sentences she would bring the wad of paper close enough so I could reach it and throw it for her again. I tried saying only one of the phrases, or two of them, but that didn’t work. It was only if I said all three of them in that order that she’d bring it back to me, and we’d go through the whole thing all over again.

She was very selective about which paper wad to use. I used to throw a wad on the floor for her to chase, but she’d ignore that one, and go get another that was, to her mind, much better suited for her purposes. I never did figure out what characteristics she was looking for, but she certainly seemed to have something in mind.

Then there were times when she’d put the wad of paper in my shoe, and I wouldn’t find it till later when I went to put on my shoes so I could go out. I’d try to put my foot in the shoe, and ~ oops! I couldn’t put it on. There was something in it. And I’d reach in and find one of Lily’s paper wads.

Lily could make me laugh better than almost anyone. One of her favorite things used to be redecorating my hair. She’d climb onto my shoulders and start chewing on my hair, usually after I’d washed it and it was still wet. I would have combed it out and arranged it the way I wanted it, and that was when Lily would get up there and start rearranging it, so it would look completely different when she was done. Sometimes she even changed the side on which it was parted, and I’d have to go back and re-rearrange everything once she’d finished her work.

On the right, she’s on my shoulders redecorating my hair, one of her favorite things to do. On the left is Lily and me on my couch in January of 2018. She’s lying on me so my face is covered and all you can see is my hair. Usually, she didn’t like having her picture taken, but this time she wanted to be the center of attention. 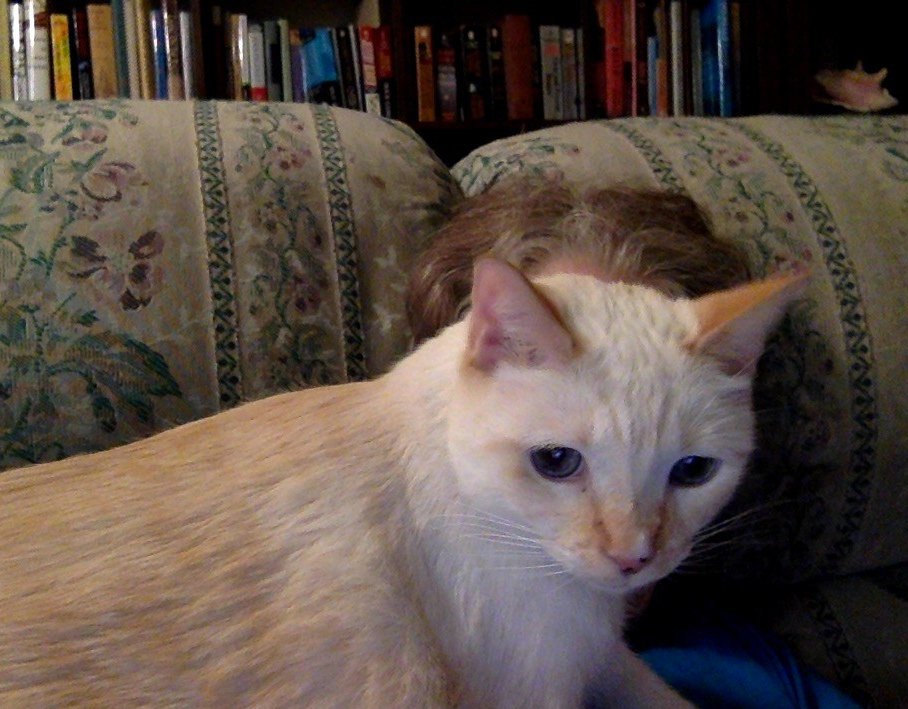 Silly funny kitty! I loved her so! I miss her so! My apartment is so empty without her!

I’m grateful for many things with regard to Lily, and all the cats God blessed me with over the years. Rosie and Lily were the last two, and they probably had the most significant influence. God used Rosie to save me from killing myself, and also to rescue me out of the suicidal mindset I’d been in most of my life.

It took about five years, but having her to care for made it so I wasn’t always focused inward and constantly thinking about my pain ~ because I was in pain. I was in agony because God hadn’t started healing me from my childhood yet. That process didn’t really begin until I got Rosie. Once I had her I had someone other than myself to focus my attention and energy on, who actually seemed to love me, even if she was just a fur-person, and not human. I realize now that God was loving me through her, because I wasn’t yet able to accept God’s love directly.

Over the years I’ve come to appreciate that the fur-people of this world are better at loyalty and loving than most humans. They’re somehow closer to God because they’re unadulterated by sin.

Both Rosie and Lily were a blessing many times over. They could make me laugh at the silliest things, and in addition to rescuing me from suicide, God also used them to teach me about gratitude.

Gratitude is a vital ingredient for physical, mental, emotional, and spiritual health, and it took furry creatures who can’t speak with words to educate me on this fact. I’m so grateful that I finally know about it, however, because it’s knowledge that I use everyday, even when I don’t feel like it.

The LORD strengthens and protects me; I trust in Him with all my heart. I am rescued and my heart is full of joy; I will sing to Him in gratitude. ~ Psalm 28:7, NET.

Yet true godliness with contentment is itself great wealth. ~ 1 Timothy 6:6, NLT.

I’ve learned that I can be grateful for what God has given me even when I’m feeling sad, like right now, because even though I miss Lily terribly, and it’s been many years since I felt this much pain, the fact is, she brought a great deal of joy into my life. I will always have those memories to fall back on. She will always be able to make me laugh because I can look back and remember the goofy things she did. I’m just hoping that the pain, especially the really intense anguish I’ve been feeling over the last few days, will decrease so I can function.

I thank you, Lord, for all the marvelous gifts You’ve given me! I’m so grateful for everything You’ve done in my life!

I know this post is quite long, but I had a lot to say, given Lily’s demise and all. So please forgive me for giving you so much to read. I hope you enjoy it!