Yup, that’s me. I am a flawed, fallible, and sinful person. That’s why I’m so incredibly grateful for the Cross and what Christ did there for me. Christ’s death on the Cross, and His subsequent resurrection mean everything to me, because without them I would have succeeded in one of my many suicide attempts, and then I would have ended up in Hell. So there isn’t enough gratitude throughout the whole universe for me to express how grateful I am to Jesus and the Father and the Holy Spirit.

That said, I still mess up on an extremely regular basis.The difference is, because I have Christ in my life, I can ask Him to forgive me according to 1 John 1:9.

If we confess our sins, He is faithful and just to forgive us our sins and to cleanse us from all unrighteousness. ~ 1 John 1:9, NKJV.

The reason I bring this up is because I recently became acutely aware of just how flawed and fallible I truly am, and it’s probably at least partly a result of the abuse from my childhood. If you’ll remember, I’ve said before that the pain inflicted on me when I was little is my parents’ responsibility, but I bear the burden for what happens now as a result. I’m an adult now, so I can’t blame my childhood if I decide to go out and rob a bank or burn down a house (which, by the way, are things I would never do, just so you know). This post isn’t about that. It’s about how I function in relationships.

Relationships are very difficult for me, something that’s fairly common for people who are survivors of child abuse, and especially for people who’ve experienced childhood sexual abuse. The only time I was safe when I was little was when I was alone, so I learned fairly quickly that being an introvert was the best way to keep myself safe and abuse-free. Of course being an introvert didn’t protect me from Harry and his horrors, but nothing could safeguard me from that. God made things easier, however, because He gave me the ability to become multiple, and that saved my life many times over. So even though I couldn’t keep myself free from being abused, at least I could stay alive.

Recently I got into a difficult interaction with a dear friend. She’s probably the best friend I have in the world, and I love her dearly. I will do anything for her if it’s within my power, even to the point of dying for her if need be. She’s been with me through thick and thin, and she knows everything about me.

I’ll call her Sylvia for purposes of anonymity and privacy.

Sylvia’s mother died on February 25th of last year, so this whole year has been really hard for her. Most of the time I’ve been fairly good about being available when she needs me, but the last month or so I blew it big time, because I fell into my usual little hermity way of doing things, and in the process I’m ashamed to say I forgot about calling her for a couple of weeks. (I didn’t forget about her; I thought about her all the time, but somehow calling her became separated in my mind from thinking about her, as strange as that seems.) But I just plain forgot about everyone else for a couple of weeks, and poor Sylvia got the worst of it because she was the neediest, legitimately so. It ended up being more like a month because once I realized I’d neglected her for two weeks, it took me another two weeks to get up the courage to reestablish contact. I knew she’d be mad at me ~ justifiably so ~ and I’d have to apologize, which I didn’t mind doing. I was wrong, after all!

I wrote a post back on June 18, 2019, entitled I Would Make a Great Hermit in which I related why I like being alone so much, and why it’s so easy for me to do my hermity thing, so to speak.

So I had a lot of apologizing to do, and Sylvia and I had to figure out how I could change the way I do things so the last month of me neglecting her wouldn’t happen again. We set up a time when I went to see her and we sat down and talked it all out. And we decided that I would text her every couple of days just to say hi, and maybe I would include a funny cat photo with my text (I have a LOT of funny cat pics. I find them on Facebook ALL the time in this Facebook group I’m part of, Episcopal Cats With Problems.) Below is a classic example. 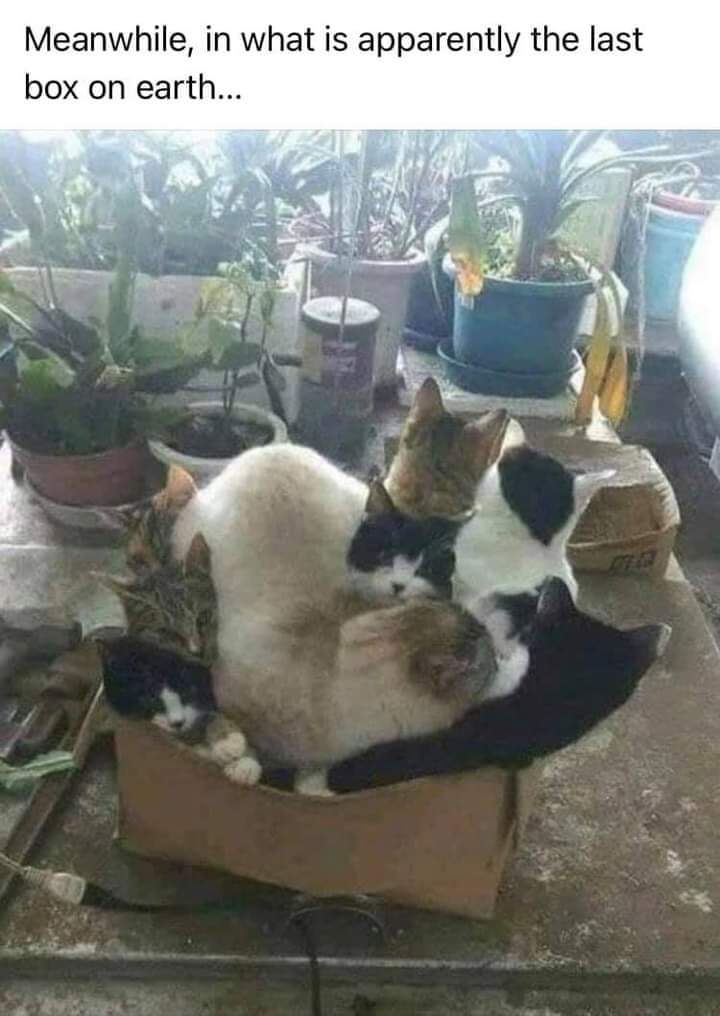 So I think I’ll leave it at that. Every time I look at the above photograph I start giggling helplessly. I think there are nine cats in that box, and for the life of me I can’t figure out how they all crammed themselves in there. One of the things I’m most grateful to God for, aside from the Cross, is a sense of humor, which I know I got from Him, because I know He has one too. I’m sure He laughs every time He sees photos like this just like we do.